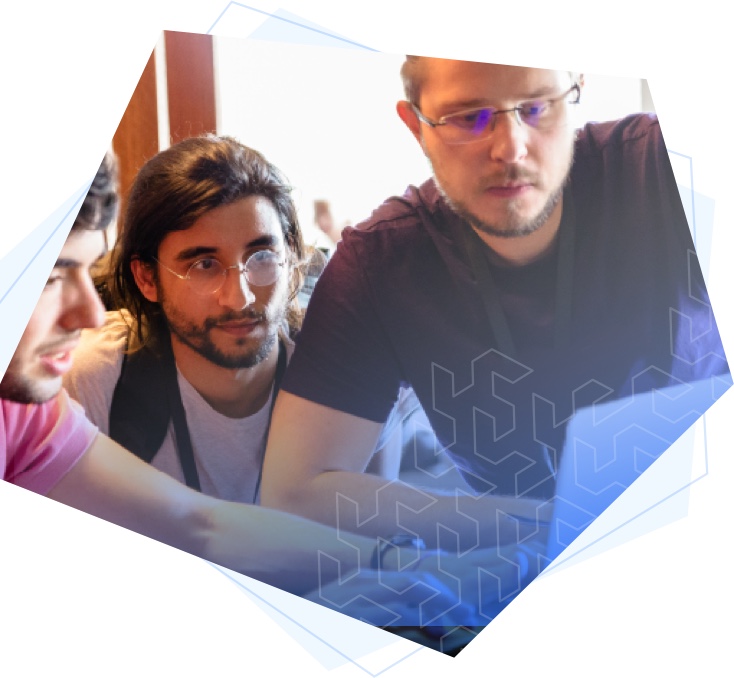 Our research and development efforts are driven by beliefs about how technology should serve humanity.

We pursue diverse projects covering different timescales in multiple fields related to computation, communication, and knowledge. We work on pure applied research and use-inspired basic research, with an interest in expanding to pure basic research in the future. A clear perspective of our active research projects and future directions begins with a better understanding of where we’ve been.

“We consistently bet, not only that the future could be a fantastic and wonderful place, but that it’s worthwhile for us, as an organization, to work toward that future."

Our work stretches across the research pipeline. Some topics — such as decentralized identity — are squarely in the realm of pure applied research, with learnings making their way to production code. Research into applied category theory and other fundamental topics provides useful insights but, may not have immediate practical implications.

Protocol Labs itself began with the desire to make it easy to name, organize, and share data in a scalable way.

Those efforts became IPFS, a free and open-source software project to allow users and applications to directly share information without needing a central server. Within IPFS, expertise in programming language theory led to Multiformats, an effort to make our technologies adaptable and upgradable in a future-proof way, and IPLD, our data model for content-addressed data. Together, these projects have an ambition for developing self describing data and programs, making different pieces of software dynamically compatible. The network and transport capabilities of IPFS were eventually separated into libp2p, a modular networking stack, which has been implemented in multiple languages. Protocol Labs Research continues to support and advance these efforts.

In parallel with IPFS, where users voluntarily store data they find interesting, we designed and launched Filecoin, a protocol that allows users to pay others to store data they find interesting. Originally proposed in 2014, the Filecoin concept was further detailed in our 2017 whitepaper, with CryptoLab efforts supporting both the network launch and future improvements.

In addition, we’re actively pursuing or supporting some smaller, independent research directions and experimental projects. These efforts focus on issues separate from but deeply related to our current projects and the fields of distributed systems, cryptography, and networking. You can read more here.

Some of this support takes the form of our grant program, which supports academic research efforts related to the central mission and goals of Protocol Labs. Other support includes conference and event sponsorships, which usually involves representation from Protocol Labs researchers. If you’re attending a conference we are sponsoring, you have a great chance of catching one of us in person. Alternatively, our conference sponsorships often take the form of sponsoring free, high-quality recordings of the talks to educate (or entertain) those unable to attend.

In our pursuit of this mission, we question how technology could work better and what we wish it would do.

Thus far, we have worked to support the generation and spread of knowledge with IPFS. We see our work in peer-to-peer transports as an effort to safeguard freedom of speech and assembly in a digital age. We hope that SourceCred and our work on open-source sustainability can help support the adaptation and growth of the software on which the Internet relies. We hope that The Underlay, IPLD, and Muiltiformats improve the ability to find, verify, and compute on knowledge.

We hope to do these things in ways that make technology easy to upgrade and hard to turn against the users. We work toward this ideal by building open-source software, with users and contributors as vital components in the development process, and a licensing stack that ensures that these tools will remain free to obtain and use.