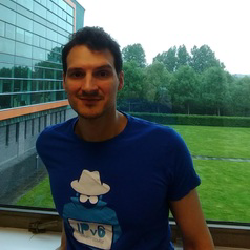 Vasileios (Vasilis) Giotsas is a research engineer focusing on network measurements and telemetry, mapping of the Internet topology, and Internet routing. He has worked as a Lecturer at the Computer and Communications department of Lancaster University, as a research scientist at the Internet Measurement and Analysis group of Technischen Universität Berlin, and as postdoctoral researcher at CAIDA (Center of Advanced Internet Data Analysis) at the University of California San Diego. He has led the work of multiple mission-critical research projects funded by the UK National Cyber Security Center (NCSC), the US Department of Homeland Security (DHS), and the Space and Naval Warfare Systems Command (SPAWAR), through which he developed expertise in the operational aspects of risk assessment and mitigation for national cyber-defence and security. Vasileios has served as organizer and reviewer for top-tier networking conferences and journals, including ACM SIGCOMM, ACM CoNEXT and ACM IMC, the IEEE Journal on Selected Areas in Communications (SAC), IEEE Communications Letters, and the ACM Transactions on Internet Technology (TOIT). He has contributed multiple open-source tools and publicly accessible datasets for the collection and analysis of routing data and security incidents, which are being used by over 100 companies and research groups around the world. His work has been distinguished with the CoNEXT 2015 best paper award and the IETF Applied Networking Research Prize 2016, and his datasets have been shortlisted in 2013 and 2014 for the ACM SIGCOMM Community Contribution Award. He was the recepient of two RIPE NCC Community Projects funds and two RIPE NCC fellowships.

2020-10-07 / Conference paper
Cloud provider connectivity in the flat Internet
The Tier-1 ISPs have been considered the Internet’s backbone since the dawn of the modern Internet 30 years ago, as they guarantee global reachability. However, their influence and importance are waning as Internet flattening decreases the demand for transit services and increases the importance of private interconnections.

Todd Arnold, Jia He, Weifan Jiang, Matthew Calder, Italo Cunha, Vasilis Giotsas , Ethan Katz-Bassett
2020-10-07 / Conference paper
Reduce, reuse, recycle: Repurposing existing measurements to identify stale traceroutes
Many systems rely on traceroutes to monitor or characterize the Internet. The quality of the systems’ inferences depends on the completeness and freshness of the traceroutes, but the refreshing of traceroutes is constrained by limited resources at vantage points.