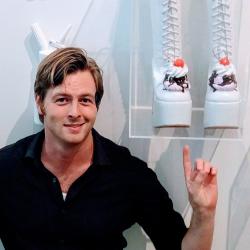 MSc in Materials Science and Engineering, 2012

BSc in Materials Science and Engineering, 2011

Michael is a Materials Engineer by training – he helped develop a polymeric touchscreen with buttons that rise out of the surface at Tactus, and then ran failure analyses on the computers and electronic components for the Avionics department at SpaceX. He’s currently researching how to decentralize the energy grid. In his spare time, he enjoys tinkering with small art projects.

Three years ago, we set out to apply the decentralization ethos to the power grid — a complex, sprawling network with some parts dating back over a century. That was the beginning of the Decentralized Energy Project, an effort within AbstractionLab.

Michael Hammersley talks about enabling transactive energy on legacy power grids. This work was done in conjunction with Alan Ransil, who is associated with both Protocol Labs and the MIT Energy Initiative, as well as Frank O’Sullivan, who is also at the MIT Energy Initative.

Formal verification tools such as TLA+ allow errors to be uncovered through exhaustive exploration of reachable states, and are the gold standard for ensuring resilience in software systems. In particular, these methods can be used to identify error states emerging from precise interactions between multiple subsystems that would occur only after long periods of testing, operation, or stacked error conditions.

Hello from the Decentralized Energy Project!

We’re two materials scientists here at Protocol Labs, and we’re working to improve the electricity grid. Why, you may be thinking, does a distributed file storage company have a project related to the energy grid?

Protocol Labs researcher Michael Hammersley discusses the current state of his work on a decentralized energy grid, a shared project with Alan Ransil, another researcher at Protocol Labs.

There are thousands of smart grid pilot projects all around the world, having begun largely in the early 2000s. With the introduction of blockchain, and with the grid becoming more unpredictable and decentralized, several use cases are becoming apparent for blockchain.