Formerly known as the Independent Research Group, AbstractionLab is currently home to three projects scouting the frontiers of the adjacent possible.

The Decentralized Energy Project is a collaboration with the MIT Energy Initiative bringing PL’s expertise in distributed systems to bear on the architecture of the public energy grid. Led by researchers Michael Hammersley and Alan Ransil, the Energy Project explores a potential evolutionary trajectory of grid infrastructure toward a decentralized system incorporating distributed energy generation. The project has formulated a functionally-defined, invariant architecture for the grid and is working with stakeholders in the energy sector to evaluate potential directions inmicrogrid develpment.

The Inter-Cranial Abstraction System is a framework for computable knowledge. The ICAS project, led by researcher Alan Ransil, integrates applied category theory with dual-process theory to build a flexible system for computation over scientific datasets, with the aim of accelerating combinatorial knowledge generation.

The Underlay — a project developed by researcher Joel Gustafson in collaboration with the MIT Knowledge Futures Group—aims to provide open access to humanity’s knowledge in a distributed knowledge graph while simultaneously tracing the provenance of each knowledge artefact.

2020-12-09 / Conference paper
Improving system resilience through formal verification of transactive energy controls
Formal verification tools such as TLA+ allow errors to be uncovered through exhaustive exploration of reachable states, and are the gold standard for ensuring resilience in software systems. In particular, these methods can be used to identify error states emerging from precise interactions between multiple subsystems that would occur only after long periods of testing, operation, or stacked error conditions.

Distributed power systems
2019-09-05 / Poster
A dual-process approach for automated knowledge creation
Scientific knowledge growth combines elements of existing theories into new proposed models, which is combinatorially intractable. Inspired by dual-system psychological theories, we conceptualize a knowledge creation process in two stages. Stage One narrows the space of existing computational elements based on contextual queues, supplying components from which a new model will be proposed.

Knowledge engineering
2019-09-05 / Conference paper
Dioptics: A common generalization of open games and gradient-based learners
Compositional semantics have been shown for machine-learning algorithms [FST18] and open games [Hed18]; at SYCO 1, remarks were made noting the high degree of overlap in character and analogy between the constructions, and that there is known to be a monoidal embedding from the category of learners to the category of games, but it remained unclear exactly what kind of structure they both are.

Distributed power systems
2018-12-21 / Report
Microgrids
Microgrids are local installations typically connecting one or multiple generation sources with some set of loads. They range in size, from tiny off-grid solar home systems (SHSs) to power infrastructure spanning a university campus or military base.

Distributed power systems
2018-09-27 / Report
Price signals and demand-side management in the electric distribution and retail system
This report focuses on power distribution and retail — the ‘last few miles’ of electricity delivery — because this portion of the power grid in particular must be transformed if we are to decarbonize our energy system.

Distributed power systems
2018-08-23 / Report
Energy pricing
This first report focuses on the mechanisms by which electricity is priced in today’s power markets. Existing energy markets govern the infrastructure that any widely-used trading protocol must interface with in the short and medium terms. 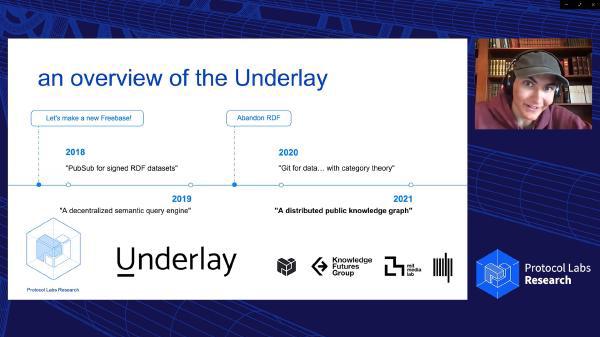 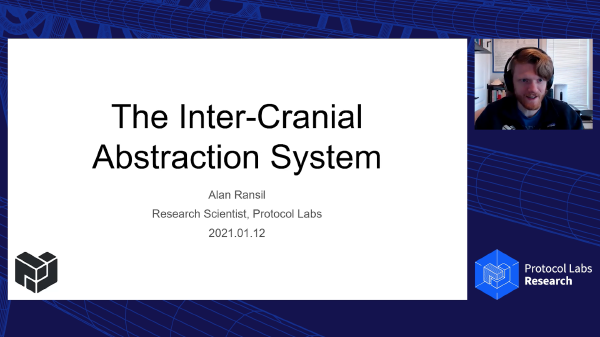 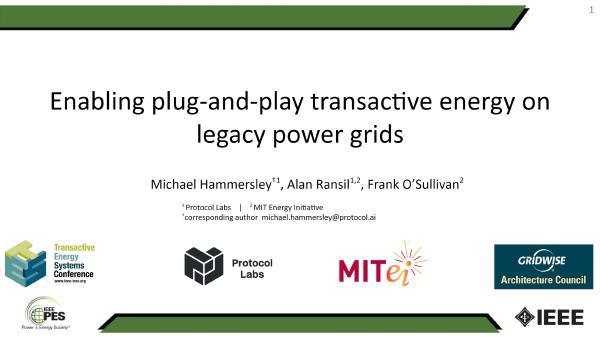 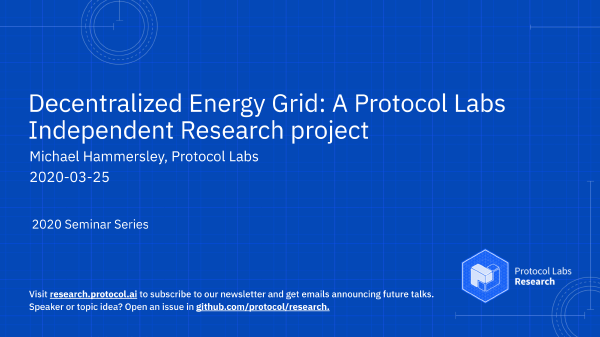 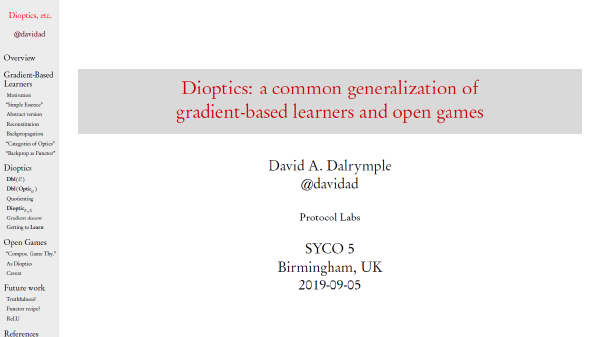 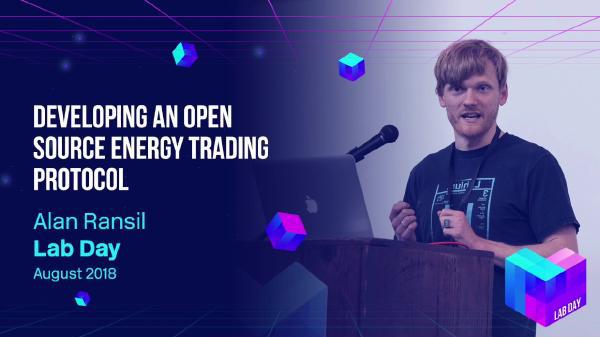 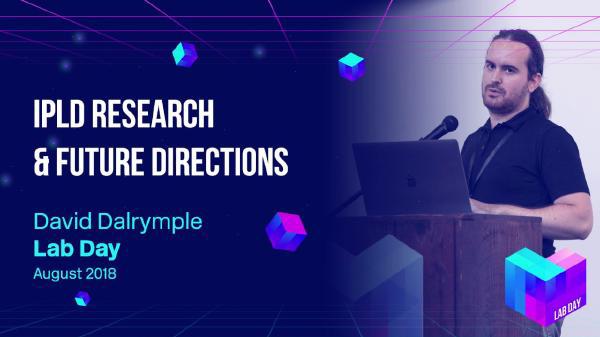 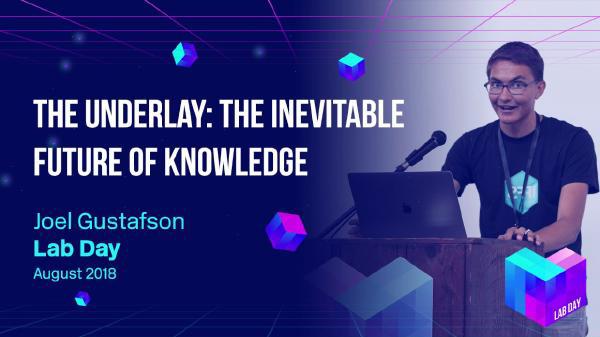 The Underlay: The inevitable future of knowledge

2021-12-21 / Blog
Protocol Labs research funding recipients 2021, part 2
Last week we introduced you to the researchers pursuing key problems in cryptography via RFP-009, RFP-010, and a Nucleation Grant. Now we are excited to share the recipients of research awards intended to fund proposals from PhD candidates, postdoctoral fellows, and faculty through our open grant offerings.

Cryptography , Distributed systems , Metaresearch , Networking
2021-06-23 / Blog
Designing a dataflow editor with TypeScript and React
This is a design report – a story about the tradeoffs and challenges that we encountered while building a medium-complexity React component in TypeScript. These include state modeling (“making illegal states unrepresentable”) basic type-level programming in TypeScript DX patterns for generically typed React components DX patterns for reusable controlled components using a Redux-like action/dispatch state paradigm These topics all deal with the external interface and TypeScript typings; lower-level implementation challenges (like optimizing drag interactions and sharing state between React and D3) have been left to a future post.

Distributed power systems
2021-01-29 / Blog
AbstractionLab Update: notes from the frontier
The independent researchers of the AbstractionLab tackle ambitious projects with huge potential to drive breakthroughs in computing, communication, and decentralization. They are the scout ship pilots exploring the farthest reaches of the adjacent possible.

Distributed power systems , Knowledge engineering , Applied category theory
2020-05-04 / Blog
Hello from the Decentralized Energy Project!
We’re two materials scientists here at Protocol Labs, and we’re working to improve the electricity grid. Why, you may be thinking, does a distributed file storage company have a project related to the energy grid?