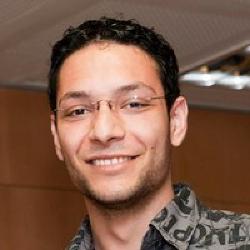 Jorge holds BSc and MSc degrees in Communication Networks Engineering, with an emphasis on embedded systems and wireless sensor networks. He received a joint PhD in Robotics, Control, and Intelligent Systems from École polytechnique fédérale de Lausanne (Lausanne, Switzerland) and in Electrical Engineering from Instituto Superior Técnico – Universidade de Lisboa (Lisbon, Portugal), on the basis of his research in distributed and underwater robotics.

His interests include communication protocols, sensor networks, robot navigation, and marine technology, as well as the organisation and optimisation of scientific research. While a researcher, he worked on national and European research projects and published in international conferences and journals. He also served as a patent examiner with the European Patent Office (The Hague, The Netherlands), the second largest intergovernmental organisation in Europe, where he focused on human-computer interaction and construction of computers.

In his spare time, Jorge volunteers with IEEE, having started as a student branch chair in 2007 and since served in numerous roles at the section, region, and global levels.

2016.10.9 / Conference paper
Towards 3-D distributed odor source localization: An extended graph-based formation control algorithm for plume tracking
The large number of potential applications for robotic odor source localization has motivated the development of a variety of plume tracking algorithms, the majority of which work in restricted two-dimensional scenarios.

Jorge M. Soares , Ali Marjovi, Jonathan Giezendanner, Anil Kodiyan, A. Pedro Aguiar, António M. Pascoal, Alcherio Martinoli
2016.9.19 / Conference paper
An algorithm for formation-based chemical plume tracing using robotic marine vehicles
Robotic chemical plume tracing is a growing area of research, with envisioned real-world applications including pollution tracking, search and rescue, and ecosystem identification. However, following a chemical signal in the water is not an easy task due to the nature of chemical transport and to limitations in sensing and communication.

Jorge M. Soares , A. Pedro Aguiar, António M. Pascoal, Alcherio Martinoli
2016.4.15 / Thesis
Formation-based odour source localisation using distributed terrestrial and marine robotic systems
This thesis tackles the problem of robotic odour source localisation, that is, the use of robots to find the source of a chemical release. As the odour travels away from the source, in the form of a plume carried by the wind or current, small scale turbulence causes it to separate into intermittent patches, suppressing any gradients and making this a particularly challenging search problem.

Jorge M. Soares
2015.11.19 / Conference paper
The Khepera IV mobile robot: Performance evaluation, sensory data, and software toolbox
Taking distributed robotic system research from simulation to the real world often requires the use of small robots that can be deployed and managed in large numbers. This has led to the development of a multitude of these devices, deployed in the thousands by researchers worldwide.

Jorge M. Soares , A. Pedro Aguiar, António M. Pascoal, Alcherio Martinoli
2014.11.2 / Conference paper
A graph-based formation algorithm for odor plume tracing
Odor plume tracing is a challenging robotics application, made difficult by the combination of the patchy characteristics of odor distribution and the slow response of the available sensors. This work proposes a graph-based formation control algorithm to coordinate a group of small robots equipped with odor sensors, with the goal of tracing an odor plume to its source.

Jorge M. Soares , A. Pedro Aguiar, António M. Pascoal, Alcherio Martinoli
2014.8.24 / Conference paper
Flexible triangular formation keeping of marine robotic vehicles using range measurements
This paper addresses the problem of keeping an autonomous marine vehicle in a moving triangular formation by regulating its position with respect to two leader vehicles. The follower vehicle has no prior knowledge of the path described by the leaders but has access to their heading angle and is able to measure inter-vehicle ranges.

Francisco Rego, Jorge M. Soares , António M. Pascoal, A. Pedro Aguiar, Colin Jones
2013.11.28 / Conference paper
Design and implementation of a range-based formation controller for marine robots
There is considerable worldwide interest in the use of groups of autonomous marine vehicles to carry our challenging mission scenarios, of which marine habitat mapping of complex, non-structured environments is a representative example.

Jorge M. Soares , A. Pedro Aguiar, António M. Pascoal, Alcherio Martinoli
2013.5.6 / Conference paper
Joint ASV/AUV range-based formation control: Theory and experimental results
The use of groups of autonomous marine vehicles has enormous potential in numerous marine applications, perhaps the most relevant of which is the surveying and exploration of the oceans, still widely unknown and misunderstood.

Jorge M. Soares , A. Pedro Aguiar, António M. Pascoal, Alcherio Martinoli
2012.4.10 / Conference paper
Triangular formation control using range measurements: An application to marine robotic vehicles
This paper addresses the problem of maintaining an autonomous robotic vehicle in a moving triangular formation by regulating its position with respect to two leader vehicles. The robotic vehicle has no a priori knowledge of the path described by the leaders and its goal is to follow them by constantly regulating the inter-vehicle distances to a desired fixed value, using range-only measurements.

Jorge M. Soares , Mirko Franceschinis, Rui M. Rocha, Wansheng Zhang, Maurizio A. Spirito
2010.6.16 / Conference paper
Experimental and analytical performance evaluation of a real opportunistic wireless sensor network
The use of opportunistic communications, while increasing in popularity, is still limited, due in part to some uncertainty that still exists regarding its performance in real-world conditions. This paper tries to assess the real performance of an opportunistic routing implementation in a physical setting, by comparing it with its expected performance, determined by a simplified theoretical model.

Jorge M. Soares , Wansheng Zhang, Mirko Franceschinis, Maurizio A. Spirito, Rui M. Rocha
2009.12.15 / Conference paper
CHARON: Routing in low-density opportunistic wireless sensor networks
Combining wireless sensor networks (WSNs) with delay-tolerant networking (DTN) has the potential to extend their use in a multitude of previously impossible applications. However, and despite numerous proposed solutions, there is still wide debate as to how to best route messages in these networks and, more importantly, how to do it in an energy-efficient way.

Jorge M. Soares
2009.8.3 / Conference paper
Power management extensions for Tagus-SensorNet
A flexible Wireless Sensor Network platform for easier implementation of diverse applications has been developed and deployed at one of the Institute Superior Tecnico - Technical University of Lisbon (IST-TUL) campus.

Karola Kirsanow , Jorge M. Soares
2021.5.24 / News
Call for Participation: DI2F: Decentralizing the Internet with IPFS and Filecoin
The first edition of a research-focused workshop on decentralisation, IPFS, and Filecoin is here! DI2F is taking place alongside IFIP Networking 2021 on 21 June 2021 and has a packed programme full of interesting paper presentations, demos, abstracts, hands-on tutorials and invited talks!

Distributed systems , Networking
2021.5.13 / Careers
We're hiring!
Protocol Labs Research has been growing rapidly, with the launch of CryptoComputeLab, CryptoEconLab, and CryptoNetLab, a number of new projects, and new researchers, advisors, and support staff joining the team.

Jorge M. Soares
2021.2.3 / Event
Decentralising the Internet with IPFS and Filecoin (DI2F) workshop at IFIP Networking 2021: Call for Contributions
Since the InterPlanetary File System (IPFS) was first introduced in a 2014 whitepaper, interest from the research community on improving and building on its protocol stack has been steadily growing. A search for “IPFS networking” on Google Scholar now returns over 1500 results, and that is just a fraction of the relevant publications.

Networking , Distributed systems
2020.12.2 / News, Team
Anca Nitulescu joins Protocol Labs Research
Anca Nitulescu is joining CryptoLab (Update: now CryptoNetLab) as a Research Scientist. After obtaining their PhD in cryptography at ENS Paris, they worked as a Postdoctoral Scholar at Aarhus University and as Chief Cryptographer at Cosmian before coming to Protocol Labs.

Karola Kirsanow , Jorge M. Soares
2020.8.26 / News, Team
Vasilis Giotsas joins Protocol Labs Research
Vasileios (Vasilis) Giotsas is joining the Resilient Networks Lab (ResNetLab) as a Research Engineer. He comes to PL from Lancaster University, where he was an Assistant Professor, after stints at Technischen Universität Berlin and the University of California San Diego.

ResNetLab
2020.4.27 / News, Grants
Announcing our COVID-19 Open Innovation Grant awardees
After a marathon review, followed by necessary legal and financial procedures, we are happy to announce the projects we are supporting with Protocol Labs' COVID-19 Open Innovation Grant program. This program was created to surface and support open-source projects working on tools to help humanity through present and future pandemics.

Jorge M. Soares
2020.4.20 / News, Team
Karola Kirsanow joins Protocol Labs Research
Karola is an experienced paleogeneticist, having studied and done research at Cornell, Oxford, and Harvard. While at Johannes Gutenberg University Mainz, Karola led a project looking at the genetic adaptation of modern humans to an agriculturalist diet and, in 2016, she founded a consultancy specialising in academic grants applications, scientific editing, and data analysis.

Jorge M. Soares
2020.3.26 / News, Grants
Protocol Labs launches a COVID-19 Open Innovation Grants program
In 2018, Protocol Labs launched a Request for Proposals program to support research in distributed systems, cryptography, and other areas of interest to our projects and company. To date, we have given over $500,000, with results made available to the public under open-source licenses.

Jorge M. Soares
2020.2.25 / News, Team
Yiannis Psaras joins Protocol Labs Research
Yiannis (Ioannis) is joining the Resilient Networks Lab, which he helped get off the ground after becoming an advisor to PL in July 2019. Yiannis is currently a fellow of the United Kingdom’s Engineering and Physical Sciences Research Council and a Lecturer at University College London, where he has worked on a number of topics within the broad field of networking, with a significant focus on Information-Centric Networking (ICN).

Distributed systems , Networking
2020.2.18 / News, Team
Sarah Azouvi joins Protocol Labs Research
Sarah joins us from the Information Security Group at University College London, where she did research on consensus and worked towards her forthcoming PhD in Computer Science. During her studies, she collaborated with Protocol Labs and was also an intern at Calibra.